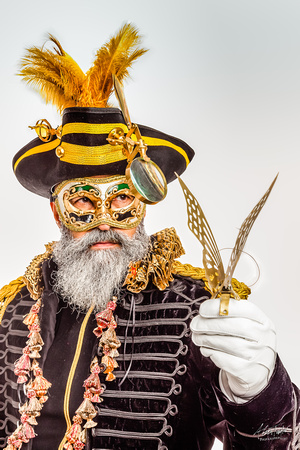 You may have noticed some of our photographs feature steampunk costumes, but what is steampunk and why is it so popular?

Steampunk is a subgenre of science fiction, inspired by 19th century steam-powered machines, it combines design and technology, to create an aesthetically pleasing look. It can feature different eras, although the Victorian era is a common theme, and allows people to create a fantasy world.

Steampunk allows people to create and design elaborate costumes, characters and machinery. The term 'steampunk' was created by an author called K.W. Jeter in the 1980s, where he stated "Personally, I think Victorian fantasies are going to be the next big thing, as long as we can come up with a fitting collective term for Powers, Blaylock and myself. Something based on the appropriate technology of the era; like "steam-punks," perhaps...."

What do Steampunkers love about Steampunk?

People are often drawn in, with a love of DIY and craft, or 'tinkering' with the designs and machines, allowing them to be creative and unique.

Lincoln holds it's Steampunk event 'Weekend at the Asylum' every year, now known to be the longest running festival in the world. Starting in 2009, the even it held across the city, within the cathedral quarter by the Victorian Steampunk Society. Starting originally with 432 steampunks it has now grown to around 35 to 40,000 people a day, with people attending from all over Europe.

Our love for steampunk images started initially on a visit to one of the events, where we took images in the form of 'street art'. Slowly getting to know the members and often having steampunkers visit our studio.

For more information on courses or packages available, or to book contact us here.